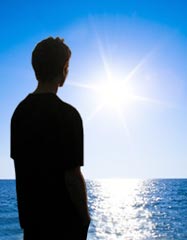 Mr Raymond R.
I often perceive the outline of the sun trembling. More rarely, it is the entire sun that does so. When the latter phenomenon is produced, the whirling does not stem from the center of the sun, but is always preceded by a dot of light that seems to whirl on its periphery, and that then spreads towards the center, whether brutally, whether progressively.
Friday night, at around 7 o'clock, I was coming back from my parents by car. The sun was going to set soon and was completely red, so it was possible to look at it. I was looking at it from time to time, when the driving allowed me. At a certain moment, I saw it whirling, one second clockwise, one second counterclockwise. I tried to see what effects would take place, if I practiced physical exercises while I was focusing on the sun: static muscular tensions, lateral and anteroposterior head sways, rotations of the head. None of these exercises had any positive result. On the contrary, they seemed to confuse everything.
On the other hand, I felt like swaying the top part of my body, at a rhythm of one second per side (i.e. synchronized with the sun). Thus, I performed that head sway with a rather reduced amplitude, roughly 15 to 20 centimeters on each side of the axis of the body. I then found that exercise very pleasant and the rotation of the sun seemed maintained by these movements.

Mr Andre M.
After focusing on the rising sun for a minute, I watched a luminous dot on its periphery. Then, I swayed with the top of my body, one second to the left, one second to the right, followed by the point of concentration that rotated next to the sun. The sun itself seemed to darken, to become white, then finally red. I saw some kind of a cloud around it. A white halo was rotating on the periphery of the sun and caused a jolt of the sun. Then, I saw a red crescent that appeared next to the sun, swayed and disappeared, moving up. I then could see 5 red patches that seemed as big as a football, followed by a whistling in my ears. I had the impression that I was in relation with “the outside” and that a voice wanted to talk to me.
I have forgotten to say that, during an exercise practiced with the setting sun, I saw a great yellow light around the sun that was flashing every second; on the crest of the mountain, over a great distance, there was also a light that seemed reddish and that was rising approximately two meters up. These exercises are admirable and I can feel that the sun fortifies my mind.

Mr Richard S.
I have only started practicing the exercises of swaying of the point of concentration recently and I am lacking somewhat the vocabulary that would allow me to describe my impressions. Consequently, I am going to try to express myself as clearly as possible.
It was dark outside, but the inside was filled with an opaque brightness that allowed me to make out the outline of the objects. Through the picture window, I could see the stars, one of them in particular, the largest one. After an hour, I briefly saw bright patches moving in the center of the room. I observed the curtain of gauze that undulated lightly and attributed the moving patches to its undulations. In fact, the patches were becoming more and more agitated, though the curtain was perfectly still. I closed my eyes to drive these visions away and when I opened them again, the “shadows” were above my bed.
I then turned my eyes towards the star and it seemed, through the gauze of the curtain, to have the shape of a cross with spiky branches and a circle in the center. I would not have been so surprised if, after having contemplated it for a brief moment, I had not seen a bright dot shine on the ceiling of the room. That dot of light did not resemble the phosphene in any way. It was similar to the point of concentration that imposes itself to my mind. It did not matter where I looked, the walls or the ceiling: the dot of light always remained in my field of vision. The shapes that were moving in the room were now very close to me. Violent shivers ran down my spine and I could not control them. I then performed the following silent prayer: if you are wandering souls, if you are seeking the path of the truth, if you are aspiring to live in God's light, look at that dot of light on the ceiling, a symbol of the infinitely small and the infinitely great, and you will find the way that leads to Him. Immediately, the point started to rotate in a spiral towards me, as it was growing bigger. The phosphorescent light passed through me and I was flooded by an intense joy. I had the impression that my body was floating in the void, above my bed. (…) Then, I could still see the light that had flooded me, as a mental image.
I soon felt the need to close my eyes. It was rather like a voice that was not coming from myself, but from these spirits and that suggested that I should close my eyes.

Mr Andre M.
On August 28th at 9:30 pm, I was sitting in my garden on a folding stool. The summer sky was still blue, though I could already see the stars. I was practicing the following exercise: I was visualizing sparks rising from my perineum, then a yellow light rising up to the top of my torso; then, sparks that exited through the top of my head and that spread in the cosmos, forming a great circle.
While I was practicing that exercise, my eyes were fixed on the sky. At the moment when the sparks were settling in the cosmos, a star detached itself from the sky on my left, and came towards me. It then exploded producing several colors: green, pink and yellow, forming a circle roughly three and a half meters wide. That was the first time in my life that I saw such a thing. I enjoyed it greatly and my impression, at that moment, was that I was asked to work with the cosmos.

Joseph S.
(…) I focused my attention on a star, a very beautiful star. I soon realized that it was different from the others. It seemed to shine more and I could not get my eyes off it. Suddenly, it seemed to move closer to me and then back to its original position, at a very specific rhythm (it is impossible for me to describe the phenomenon more precisely). I stopped focusing when it appeared even larger, giving me the strange impression that it was approaching the earth considerably and very fast.