Daniel Fernandez
Gyrascope constructed using only recycled parts
I am a practitioner of Phosphenism and I live in Spain. I constructed a Gyrascope following the directions given by Dr LEFEBURE in his book Kundalini Volume 1.
I used a bicycle wheel, black paper, aluminium foil, a small motor taken from a child's game and a games joystick.
Several photos as well as a small video will help you to understand a bit better what I made.
I simply indicate that a current reverser lets me turn the wheel in both directions and a lever taken from a game lets me change the speed.
Within a short period of time, I had fantastic experiences.
Many thanks to Francesc CELMA, Phosphenism's representative in Spain, for having made me discover the works of Dr Lefebure.

Dimitri S.
Every evening, just before going to sleep, I practice Gyroscopic meditation for one hour using the Virtual Gyrascope. Starting from the second week I experienced many conscious dreams. Then, there were dreams of flying which I tried to direct as best I could. At the end of a month and a half, thanks to my discussions with Mr Stiennon, I finally understood that I should not try to direct them, but rather accept them as they came. The exercise of concentrating on a detail of an image or a sensation very quickly let me expand the experiences and above all make them last longer.
Over a period of three months, in addition to motion at vertiginous speeds, I was woken up by an inner dazzling light. A „supernatural‟ light, coming from who knows where, filled my entire field of vision.
One time my body began to undulate so strongly that the blankets ended up falling on the floor and this woke me up. Another time, I had the impression that it was my physical body which began to undulate and then I had the surprise of seeing that it was in fact my double. The awareness of my etheric body being seized by a vibratory undulation was a very striking experience.
Three months after beginning my practice with the Virtual Gyrascope I can state that I clearly feel the energy of Kundalini. Most often it manifests itself by undulatory sensations which result in out of body experiences or astral travel, also called extensions of consciousness, in universes essentially comprised of sensations.
My perception in the waking state, concerning the environment I live in as much as the persons around me in everyday life, has been profoundly modified. In brief, I would say that I feel much stronger, if not to say more powerful within, all the while remaining very detached in the face of all situations. A kind of peace or gentle strength has settled within me. With immense gratitude to Dr LEFEBURE. 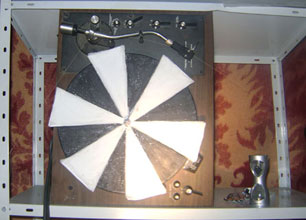 Gyrascope made from a second-hand record player.

Rydy C.
I simply used a record player and a long-playing (LP) vinyl record, 33⅓ rpm: I divided the record into 12 sections. I pasted 6 sections of white paper on it alternating them with the other 6 sections (letting the grooves of the vinyl show) and I covered these sections with a black matte color. Having placed the record player upright and at eye-level, I therefore had a record turning at 33⅓ rpm which I looked at using direct lighting, and I did this in sessions of 45 minutes every day. Every 3 or 4 minutes, I would cut the lighting and close my eyes for approximately one minute, occasionally doing head sways.
Rather quickly (starting from the second or third day), I would see the record turning as soon as I woke up. I mean to say that having my eyes closed just after waking up, I would see a light grey-colored record turning in my visual chaos (obviously, in place of the vinyl record which I looked at every day). As it turned, it slowly appeared, then disappeared just as slowly (leaving in its place the usual visual chaos), then reappearing again in the same way only to disappear once again… I would say that between the appearance and the disappearance, there was a period of three seconds. I add that this rotating record appeared to me, at the most, four times in a row during a single moment of waking up.
Most often, it only appeared two times in a row. Obviously, up to this point, one would tend to think that there is nothing really extraordinary in the anecdote. Except that one day, or rather one morning, I had an absurd idea. So, after the first appearance of the record, and when it had disappeared to undoubtedly reappear, I said to myself: „it would be amusing for it to reappear, but turning in the opposite direction‟. Obviously, my wish was really quite absurd because I had seen the vinyl record (the real physical one) turning only in one direction. Well, that particular morning the record began to turn in the other direction! And this happened two times in a row, and always according to what I wanted.
What do you think?
- - - - - - - - - - - - - - - - -
Reply: as Dr Lefebure explains in his book: „Koundalini Volume 1‟ this experiment clearly brings to light well that there is a „counter-force‟ in the brain, and knowing how to use it leads to the awakening of one's Kundalini.