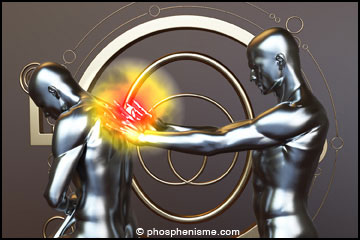 M.F. Gema / Therapist – SPAIN
As a professional therapist, I would like to comment on some of the results I obtained using Dr LEFEBURE's method during the three years I used it with my patients. I hope that you will be able to share this information with other therapists to encourage the marvelous practice of Phosphenism with subtle educational and therapeutic applications.
The last case I treated was that of a twelve year old child. His mother came to see me and asked me if there was anything that could be done for her son's lack of self-esteem. Moreover, he was extremely introverted and reserved. During the past few months, nothing interested him and he had a total lack of interest in his studies. The results at school were very bad, with notes of 2 or 3 out of 10.
I started to work with him using phosphenes and reflexology.
After only three sessions, his mother came to see me and said that her son had confessed to her that he'd had a bad experience at school with a woman teacher when he was younger. This experience had marked him very much and affected his emotions. His mother, saddened, asked me, „Why did he wait so long and tell me only now?‟
In the end, her son progressed at school, and that made her decide to buy the ABC of Phosphenic Mixing box set in order to practice at home every day.
After two months of regular practice, her son's grades improved with results of 5 to 9 out of 10. In addition, he had much greater self-esteem and was more sociable and happier.Another spectacular case was that of a forty year old lady who had the habit of taking sleeping pills every night before she went to sleep for the past two years. Furthermore, she had a tendency to heavy depression, a disproportionate emotionalism and recurring personality deficiencies. As in the previous case, I combined the sessions, and this time I used Doctor Lefebure's lamp and alternating hearing. Her recovery was progressive, and now at the end of almost a year of sessions (she bought the Alternophone), she is a different person. She has more confidence in herself, her face is joyful, she is more emotionally balanced, and she sleeps, as far as I know, without taking sleeping pills. This woman is one more among many others who thank the method of Dr LEFEBURE for having changed their lives.

Guillaume: Phosphenes and emotional state
One day, I came back home in a particularly low energetic state with negative thoughts, destructive emotions, rage, angst…
I was unable to practice anything at all in that state. I lay down on my bed and I simply did phosphenes by focusing on a lamp for thirty seconds in periods of three minutes, and this during forty minutes altogether… Little by little, I fell asleep. During this exercise, I did not try to change anything, I simply observed the phosphenes. Result = I had a dream that night that was particularly intense. I dreamed that there were many snakes leaving my body, and the dream was so intense that I suddenly woke up, but without feeling any anxiety as one does with nightmares, for example. I fell back asleep very quickly and, in the morning, all the anguish of the previous day had disappeared.

Danielle D. - France
Dear Mr. Stiennon,
Recently, I had a very surprising and pleasant experience. On the night in question, when I went to bed I had a pain in my back. But I did my usual phosphenic practice anyway. During the night, I had a „visit‟ from Doctor Lefebure who placed his hand on my spine, moving it up and down several times. I felt a great heat and an immediate unbelievable feeling of well-being. The next day, the pain had vanished and I was in a state of complete well-being.
Many THANKS.

Marc G, Physiotherapist holding a National Diploma - France
I would like to tell you about a result I judge to be very positive: this concerns an 8 month old baby who was not yet able to hold his head straight when he was brought to me for psychomotor physiotherapy. I advised his parents to have him do phosphenes using the Phosphenic Pocket Lamp. To my great surprise, during the following session (8 days later), I remarked that not only had he almost completely acquired the ability to hold his head straight, but reactions were also provoked in his chest!
The parents told me that the baby wanted the lamp as soon as he woke up and also fell asleep with it!
I now have added a psychomotor exercise and the baby is developing in most unexpected way!
The Phosphenic effect is certain.

Mrs Marie-Rose M. THE PURIFICATION OF THOUGHTS
Thanks to the method, I experience less intellectual fatigue and feel much more calm, after just 4 months of practice. My consciousness has been purified and I now experience less negative thoughts about others. If I do experience such thoughts, I can drive them away very quickly as I find them disturbing.

Bernard B.
Following a stroke, I experienced problems with my vision. I regularly practice with the phosphenes, at least 30 minutes a day. After approximately six months of practice, I went through another ophthalmic check-up. The physician was dumbfounded as he realized that my problem had disappeared. He then told me that he believed that I could have become blind, a fact that was confirmed by another eye doctor.

Anonyme
Twice, during the practice of sways, I have perceived bright yellow-green waves of movement in my visual chaos… I did not know what to think about it, but after a period of reflection, I believe it might be due to the elimination of the toxins in my brain (alcohol, tobacco).

Ios
After approximately one month of practice of static tensions and vertical head sways, my dreams have become more intense and I remember them better when I wake up. I have also quit drinking and smoking and persevere with much hope.