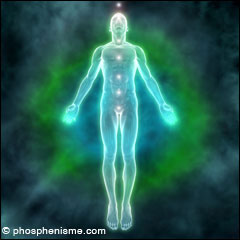 Here is a detailed rendition of an exercise taught by Daniel STIENNON during the advanced continuing training course. The exercise consists in asking a person to stand in front of a white wall, then to focus a point located approximately ten centimeters above his/her head. After a while, a luminous halo can be perceived above the person's head. The density of that halo will depend on two factors:
- The state of mind of the person.
- The capacity that the observer's brain has to project the diffuse glow around the retinal image of the person.
In Esotericism, such an observation is called: the perception of the etheric body. Advanced phosphenauts also perceive a mass of colors around the person. It is often called the perception of the aura, though it would be more correct to call it the densification of our visual chaos. The interpretation of these colors is contingent on our capacity for „clairvoyance‟.

The more our brain has a capacity for clairvoyance, the more it will allow us to obtain informations in our field of vision.

But, let us carry on with the exercise: spend a moment observing the diffuse glow that appears around the person standing in front of the wall. Then, ask the person to kneel as fast as possible. You will be able to observe that his/her „double‟ remains in the previous position for a few seconds, as if it was „glued‟ to the wall, before going down, as if it was trying to return to the physical body. The appearance of the diffuse glow is due to its impregnation in our field of vision. The consecutive movement is related to our brain's capacity for „clairvoyance‟. It is the same phenomenon that produces the appearance of „ghosts‟.

Then, Daniel STIENNON demonstrates the densification of etheric energy by making a ball of light appear in the palm of his hand. I have seen with my own eyes that ball of energy appear and move, following the movements of his arm. Then, sitting on a chair with his eyes closed (and wearing a blindfold), he places that etheric substance on my lower abdomen. At that moment, I feel a column of energy wrapping itself around me. Then, suddenly, it is as if I was transported to an other „world‟, an other state of consciousness: a very strong and impressive phenomenon.

This shows that our etheric energy (or diffuse glow) can be amplified by other people (phosphenic phenomena are very easy to transmit) and thus increase and develop our latent abilities, qllowing us to plunge into uncharted layers of our consciousness.

Thanks to Daniel Stiennon for this fantastic experience. 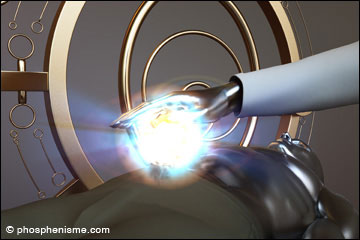 After Daniel had placed a ball of energy on my solar plexus, I felt sucked up inside my own body.
I voyaged in my veins, my arteries and some of my organs.
Visiting your own organism is quite a strange experience.
I followed Daniel's recommendations and instilled a toning energy to my entire organism.
Thanks to Daniel for this inner voyage and all his valuable explanations. 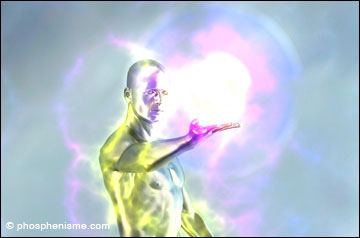 The diffuse glow can be transmitted by telepathy, all the more so if the emitter is close to the receptor. So, when Daniel projected his energy on me, I felt as if I was „outside of my body‟. Then Daniel asked me to bundle my energy in my lower abdomen and to focus all my concentration on the energy that I was feeling growing there.
„Shape it into a bundle‟ he said. „Make it whirl and rise along the vertical axis of your body, until it reaches the top of your head, then project yourself with it.‟
What a sensation! It would be too long to describe it. Anyway, one has to live such an experience in order to believe that it is even possible.
Thank you Daniel. 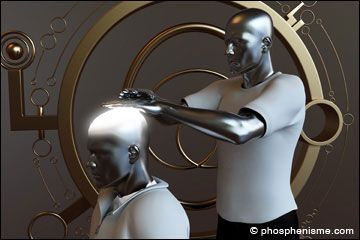 Pascal T.
What a night!

The course of advanced continuing training proceeded as usual, with its host of experiences. But, the days were nothing compared to following nights.
Vertiginous sensations of movement, vortices whirling in an extravaganza of colors and hues, I was presented sacred texts (that I could not decipher), listened to astral symphonies, was contacted by thinking energies (that passed on their teachings to me), contemplated sacred golden letters that transported me into indescribable states of consciousness…
Thanks to you all for transmitting your energies and to Daniel for his advice on interacting with the different planes of consciousness. 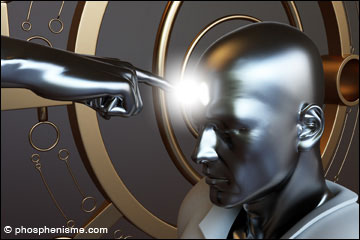 Valérie H.
Light in my field of vision.

When Daniel Stiennon transmitted his energy to me, it provoked the perception of a quasi supernatural energy.
An energy that, if I understand Daniel's explanations well, was produced by an increase of my neuronal activity. In my case, the result was the perception of flashes of light in my field of vision.
Following Daniel's advice, I projected myself towards these lights and passed through them, resulting in the accumulation of even more energy.
Thanks to all the persons who have played the role of emitters.
Thank you very much, Daniel, for allowing me to realize these experiences without worrying about a thing.