These exercises allow one to powerfully densify their double, making it even possible to manifest it at a distance. It was by using that technique that Dr LEFEBURE was seen in places where he was not physically present.

Many Phosphenists have also been able to trigger this phenomenon: out-of-body experience with the objective perception of the subtle body.

Described here, is the exercise such as it was passed onto Dr. Lefebure by Zoroastrian Master Artheme Galip.
Equivalents can be found in numerous traditions, for example in Shinto hermetism, Ko-Shinto, esoteric Shintoism where everything revolves around the sacred fire (phosphene) herald of revival.

And particularly in the Koto Tama (the souls of words) at the end of the exercise called Funa Kogi, Furu Tama. Furu Tama can be literally translated as shaking the soul. This rite, perfectly executed with the pronunciation of sounds, is certainly the active key, due to its high rhythmic frequency which permits one to attain the merging of body and spirit. 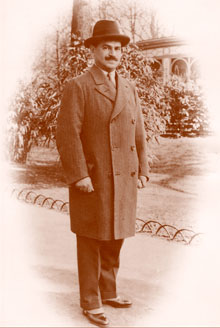 Artheme Galip, at the time when he initiated Doctor Francis Lefebure. One can note that the Master discreetly does the static tension exercise: clenched fists, the neck slightly swollen; his face, although tensed and slightly hardened, remains harmonious.
(Photo (reduced) extracted from the book Initiatory Experiences, Volume II).
When the rhythms are anchored, a simple reminder can be enough. 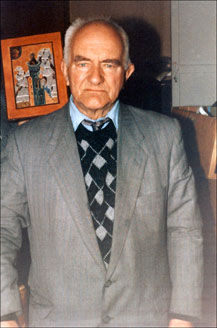 Dr LEFEBURE demonstrating the exercise of static tensions, the jaw is slightly tightened, the lungs are filled.

AN EXAMPLE OF EXERCISE for densifying and projecting the double at a distance:

Setting the muscles in tension for 4 seconds – trembling for 2 seconds – relaxation for 6 seconds, and so on…

1. Perform a physical clonus at the rhythm of 1/6th of a second.

2. While maintaining the physical clonus, repeat the mantra „kee‟ mentally, at the rhythm of 1/6th of a second. Stop the clonus and continue the mental repetition of the mantra.

Then, it is possible to:

4. Project your double in the location of your choice.

6. Visualize a whirling current of light, ascending then descending
a) in a location.
b) on a person.

For more information on the practical aspect of the lessons (tutorials)
check Dr LEFEBURE's Complete Course in Phosphenism, included in the „platinum‟ account.

Initiation is, above all, the discovery of a different environment; an environment that is always present, but to which most persons do not have access in lack of knowing or recognizing the rules that govern it.

These rules, these techniques are not genuinely secret (1) as they have been known and put into practice for all time. If questions remain about them it is due to the people who do not understand these phenomena, whether because they never have experienced them or whether because they have not followed the process through. These people discuss the phenomena without understanding them thoroughly, spreading misconceptions that are often absurd: the risk of losing one's way in the astral, of breaking the „link or silver cord‟ that connects the „astral body‟ to the physical body, and other nonsense.

When one understands that the phenomena are subjective sensations, one realizes at the same time that there is absolutely no danger in letting oneself being carried away by these sensations. Experiencing these phenomena allows one to realize the actual existence of a universe that does not belong to the material world though it is connected to it: the subjective universe. The phosphenes are the key to that discovery and practicing the exercises of static tensions allows one to delve into that genuine adventure.

Is that all? No, as these sensations point to the existence of a sensory system related to that subtle energy. Consequently, there is a form of perception that has not been fully developed in human beings, not because human beings are not evolved enough, but because they do not use it. Thus, they do not understand its mode of operation.

(1) by the way, the notion of „secret‟ is despicable, as it enslaves human beings.

NB: Do not confuse „tension‟ and „contraction‟. At the beginning of the training, it is easier to contract the muscles of the body than to provoke a slight tension. But, that quickly becomes exhausting.
After a few days of training, one will find that a slight tension is enough, as it triggers the trembling of the muscles.

Static tensions do not require a great physical effort. It is a question of dosage.

Exercises of static tensions are found in various traditions, and even though the principle remains the same: accumulating rhythms in one's thoughts by means of physical rhythms, the way they are practiced varies slightly from one tradition to another.
For instance, these exercises can be practiced lying down, sitting or standing.

In the study of these exercises, depending on the different parts of the body and the groups of muscles that have been chosen, certain traditions break down the movements even more than what we have recommended in the ‘Practical Course of Astral Projection’.
In the latter box set, the exercises are the continuation of those passed on by the Zoroastrian Initiation in which, on the contrary, only strong tensions of the whole body are practiced.

We could say that the way Doctor Lefebure recommends doing them, which was transmitted to him by his first Master, seems to strike a happy medium in regard to other traditions.
It is important to note that the tradition one chooses to follow is of little importance.
Whether one chooses a practice in which the movements are broken down or, on the contrary, a practice which puts the emphasis on global tensions of the whole body, the essential element in that kind of exercise is to choose one once and for all and stick to it.

Doctor Lefebure suggests breaking down the body in 7 areas followed by a global tension because his work follows in the lineage of Zoroastrian Initiation.
Then, once the rhythms have been assimilated, in other words when they start to occur spontaneously during sleep, one no longer has to break them down and can move on to practicing global tensions.

As everything is simply a question of an accumulation of rhythms, all one's efforts need to be directed towards respecting the time durations provided in the practical course on astral projection.
The suggested rhythms are the result of a study carried out by Doctor Lefebure on the alternation of double phosphenes, by using cerebroscopic examination.
(Check: Exploring the brain through the study of the oscillation of double phosphenes).