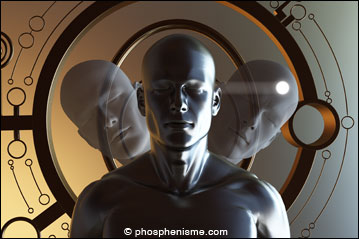 Sophie S. - France
Since I have been doing phosphenes and practicing sways half an hour a day, I have noticed a change in my character.
I have found a certain stability in my moods and I would even say a constancy in my state of mind.
I am much more resistant to stress, and I feel full of energy all day long.
I feel a calm self assurance that is present when I need to make well thought out decisions concerning my life.I feel a greater quickness of mind.

Yannick - Switzerland
Mr. Stiennon,
After practicing sways regularly for a certain amount of time (about 1 hour a day), I would like to make the following remarks and observations:
- Frontal sways have a strong influence on the psyche, and in my case, on willpower and confidence. After 3 months of steady practice, I have been able to notice certain significant changes in my behavior: the ability to speak easily in front of a large audience, greater confidence in my relations with persons of the opposite sex, work done with greater motivation…

Jean-Pierre F. - France
Technique used: I synchronized the rhythm of the alternation of the Alternophone (1 second per side) with the pendulum of an old clock.
After doing a phosphene, I focused on the pendulum for 1 minute; I then tried to picture it in my mind (with my eyes closed) and imagined a silver cord swaying to the rhythm of the Alternophone.

Result: During the night, at about 5 o'clock in the morning, a movement like a pendulum started and triggered a very strange experience. My astral body moved alternatively and precisely in rhythm, and I could see what seemed to be silver clouds appearing in the distance.
I thought deep down inside that I would like to meet my spiritual guide and to my surprise, a feminine looking being made of evanescent veils went through my „astral body‟, and I felt as if a benevolent love was penetrating me. This made me react and I woke up in my physical body once again.
Thanks to the School of Doctor Lefebure and to Daniel Stiennon who continues the work.

Christophe C. - France
For three weeks now, for about 20 minutes in the morning and 20 minutes in the evening every day, I have been practicing lateral sways in associated with phosphenes while listening to the Synchrophonia CD and repeating the mantra „EELLEE‟. For the past few days I have been experiencing a feeling of intense joy during the day, for no particular logical reason, accompanied by the sensation that my body is lighter. During the day, I have a feeling of inner tranquility more and more often, and I feel in harmony with myself (I accept myself better as I am, with my qualities and weaknesses).
Thanks to the practice of phosphenism, I think that I have „reconnected‟ my own natural self-healing system.

sabelle F. - France
Recently, I had a very pleasant experience. In the evening, I had practiced the lateral sways, the way you had taught us; I appreciate these sways very much and practice them before going to sleep.
Just on the point of falling asleep, I heard a sound which passed from one ear to the other. It was like a breath of air that was passing through me and I felt a vibration. It was a pleasant sensation. Then I felt as if I were drawn into my field of vision, with a sensation of speed and motion, when a shape outlined in light stopped in front of me. It looked like an angel, and he made movements with his hands as if he were greeting me. I thanked him, and just to see what would happen, I asked him to show me wondrous lands. The being of light flew away and the darkness opened like a vanishing mist to unveil a magnificent sun. Its rays of light were very soft to the eyes and pink bubbles came out of it and in my direction; I had a sensation of bursting when they touched me. Then, I realized I was in the sea, but with the sensation that my body was really there. I slapped the water with my hands; I felt all the sensations of touch. The mist slowly covered the light again. I was flying close to the water and could see the reflection of the sun on it.
The next day, all day long, I had a feeling of complete well-being. This released me from a lot of parasitic thoughts. Sometimes, I had the sensation that I could not feel my body, although I knew I was still here.
So, I hope that I have used the right words because it is difficult to describe and say exactly what one feels, particularly when one talks about such marvelous things.

Jean-Jacques T.
I have practiced the three types of head sways with the Alternophone.
The sound OM rotates in my head. Then, as if I was watching a visual and auditory show, the energy moves downwards through my head, going from chakra to chakra while an other energy that seems to emanate from the center of the earth moves upwards through the perineum. Those two energies join in my solar plexus.

Jean-Jacques T.
From 2:30 pm to 3:30 pm mental sways with alternation.
From 4:00 pm to 5:00 pm Gyrascopic meditation + Alternophone on 1/12th of a second.
I work on my double, trying not to move my body. I feel a fluid in my double. I perceive „presences‟ around me. Towards the end, I reintegrate my double and a „robe of light‟ is wrapped around me.

Isabelle F.
Following my evening exercises:
Lateral sways + square breathing + ocular convergence
I was floating completely in my rhythms. A movement going up and down. I found myself completely upside down, head down and feet up. I then found myself in the place where I lived during my childhood. I could feel rain and then found myself back in bed, back into that up and down motion. I could hear a strange voice resonating in my head. The voice seemed clear but I could not remember any of the words it pronounced. I then found myself in the cosmos, experiencing a pleasant sensation of floating. I let myself go and watched a magnificent scene: small balls of white light floating far away. I then found myself within the depths of the sea, I could sea a fish and a coral. The most surprising element of that experience was the calm I felt during it.

Aurinko
Spontaneous sways:
Today, I had an interesting experience during a session of head sways (figure-of-8). It was near the end of the 40 minutes session that I suddenly felt that I was not in control of the sways any more. My head was swaying without the intervention of my will. I realized that my head was swaying by itself with perfect grace and regularity without any intervention of my will, and with a greater amplitude than usual. Meanwhile, as an experiment, I tried to relax completely, to move in a perfectly effortless manner. My head kept swaying spontaneously at a flawless rhythm. Moreover, it was much easier to induce a rhythm in my thoughts: usually, during the figure-of-8 head sways, I find it difficult to form perfect eights in my consciousness, or it requires a tremendous effort to form a nice figure. Nevertheless, during those spontaneous sways, the figure was drawing itself effortlessly! Finally, at a certain point, I experienced a very powerful sexual desire though I did not have any erotic thought during the session, a fact that makes me believe that the energy of Kundalini probably had something to do with that phenomenon.

Omani
I would like to tell you about the „sensations‟ that I have felt during a session of lateral sways…
The first sensation is the very disconcerting impression that something similar to a „nectar‟ (in the mystical sense) was starting to flow like a „trickle of water‟ emanating from a region near my heart. The first time that I experienced that sensation (which goes much further than a simple well-being) I found that it resembled the emergence of the „feeling of love‟ with the sensations that accompany it (inner light, strange sensation in my belly…)
I had the very distinct sensation that this „trickle of nectar‟ could be at the origin of mystical ecstasy…

Photon69
After practicing head sways regularly for 15 days, 45 minutes in the morning and in the evening, I experienced dreams of very vivid colors, a rising of Kundalini, messages and much more.
… During the night, I feel a buzzing sound in my ears. It is a lucid dream, I am in a temple with tibetan monks singing the mantra OM together.
… yet another lucid dream, I am in a church, near the central aisle. A priest comes down with a censer and “sprinkles” everyone. I wonder what is going to happen when he reaches me.
He arrives, the incense reaches me and I feel myself go as a wisp of straw. Then I find myself back in the space I occupied before. … another lucid dream, I have to go down into an underground corridor. I walk in the half-light, the corridor is clean and new. Then, I exit and perceive a beautiful white light.
These three experiences correspond to a cleansing of my consciousness. Thus, the first cleansing has allowed me to integrate well the rhythmic initiation performed during the course of continuous formation.
I have had several very powerful experiences for several nights. Today, I perceive kaleidoscopic mandalas within the phosphenes, a fact that foreshadows the awakening of certain chakras.